According to the geomorphological division of the Slovak Republic, Fiľakovo lies in Matra-Slaná region, in the Cerova Upland system and the Fiľakovo basin subsystem. In the area of Fiľakovo basin the valley of the Belina stream spreads into 3-4 km with the alluvium width 1-1,5 km. The altitude of the alluvium in Fiľakovo area is 193 m. The highest peaks in the area are 340-350 m above the sea level (the Chrasť 350,1 m and the Šarkan 340,7 m). They are from basalt rocks from Tertiary period, but the lower parts are from sandstone from Quaternary period. The remains of the volcanic craters from Quaternary period are presented by two hills coming from the alluvium of the Belina stream: the Castle Mount, the Red Mount.

The geological development of minerals started in the end of Oligocene period 24 million years ago when the sinking of the area began. Soon the sea called Parathetys began streaming into the basin. It flooded the surface on folded Mesozoic and Paleozoic rocks. They can be found under sea sediments near Fiľakovo in the depth 700-800 m and according to the geophysical mensuration, they represent crystallic rocks such as phyllites, shales and quartzites.

The Parathetys Sea left a 600 m thick stratum of calcareous siltstone. They fill the biggest part of the Lučenec basin. This is the reason why it is called Lučenec Formation in geology. The sea was withdrawn from this area in Miocene period 20 million years ago. There remained a 250 m thick stratum of sandstone in the Cerova Upland area. This is why it is called Fiľakovo Formation.

After the sea withdrawal fluvial gravel and sand settled there. The first volcanic activity was proved 19 million years ago. The silt coming from the volcanos settled in the western part of the Cerova Upland. They are rhyodacite tuffs which can be seen in Čakanovce and Pleš. Later, 15 million years ago hot andesite magma was pushed to the upper part of the Earth crust. It is the andesite quarried in Šiatorská Bukovinka. There was a larger volcanic activity in Pliocene period and Pleistocene period too. It interfered the area. It began 5 million years ago and finished 300 thousand years ago. Its products were basalts and their tuffs. In geology they belong into Cerova Basalt Formation.

In a later period of this volcanism 4,7 million years ago from a huge volcano Monosa above Obručná there was a 4 km long flow, which finished near Belina. There was another lava flow from the volcanos south-east from Bulhary. Its remains can be found on the hills – the Kerčík and the Šarkan. There was also a lava flow from Čakanovce to Trebeľovce. Basalt has always been quarried near Fiľakovo (Fiľakovské Biskupice, Chrasť, Bulhary, Čamovce). In the past it was used for road paving. Nowadays it is used to toughen the roads. In the quarry Chrasť between Fiľakovo and Ratka there are remains of the red burnt ground from Quaternary period.

Basalt volcanism continued in this period, when the Cerova Upland began to lift. This uplift began 2 million years ago and finished 10 thousand years ago. This process had important meaning in the creation of today’s surface of Fiľakovo and its surrounding. The result of processes was the inverse surface of the ground. It means that once when there were valleys are now crests and when there were sandstone hills today there are erosive valleys. 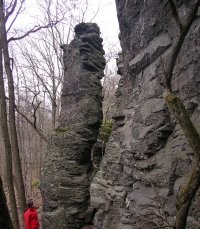 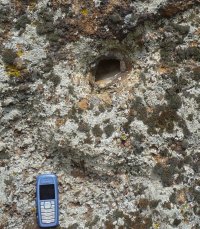 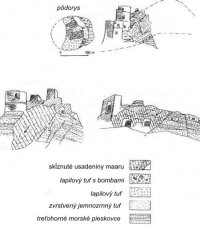 The uplift wasn’t even. In Quaternary period 300-400 thousand years ago were the last volcanic activities in the Cerova Upland area. The bottoms of the craters were filled with water. They created crater lakes. These types of craters are called maars. Near the craters there were lapillis - small volcanic fragments and also huge volcanic bombs. From these was created a tuff ring. There are only a few remains of tuff walls - one on the castle top and another on the Red Mount.

From instructional point of view the castle top is really valuable. There was built a nature trail in 2000. Inside the castle there are revealed the inner parts of the tuff walls. In the upper parts there are slide deformations caused by some volcanic materials. There are also volcanic bombs consisting of sandstone, which surface is darker and harder and the inner side of it got aired, so it is not burnt.

In the valley of the Belina stream carbonic oxide is flowing upside. It is mixed by water therefore mineral water is constituted. In the town’s surrounding there are known three springs. This mineral water is cold (10-13,5 0C), a bit mineralized (1,2-1,7 g/l) and strongly carbonic (content CO2 1,4-1,9 g/l). In the village Šíd there are seven natural springs of mineral water.