In literature it is written that Fiľakovo already had its own seal in 1356. Although nobody knows anything how did the seal look like. The new seal and the town coat of arms were made by Earl Stephan Kohary II in 1722. The seal from 1772 is famous as well. It has a silver blazon where a palm is growing from a green hill. There is a golden crown above the top brim of the blazon.

The seal of the city is round with the town coat of arms in the middle and with the annular title The City of Fiľakovo. The seal is used on important ceremonies.

Another seal from the end of the 18th century is red. The golden crown is on the top of the hill. A double-armed silver cross is  growing from the crown. There is a green palm behind it. It was used during the reign of Leopold II (1790 - 1792). Nowadays the town uses the simplier version of the coat of arms from the year 1772, that is a palm growing from a green hill with a yellow trunk and a green crown. 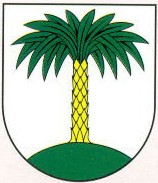